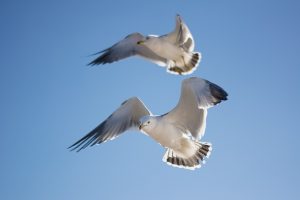 At Herrington Beach outside Milwaukee, in the modest waves of this windy, grey day, there are many seagulls actively diving for fish, a sight I have rarely seen, and it makes a strong impression on me.  Unlike so many other activities of the seagull, at least in the air, one could hardly describe this one as graceful. She circles the area from above, slowly descending in spirals, presumably zeroing in on a school of fish just beneath the surface. Then suddenly, about five to ten feet above the water, she awkwardly changes direction, her wings becoming as ungainly as a teenager’s limbs, and then loses altitude and essentially falls, like a tightrope walker off a line, beak first into the water. With a loud splash she then disappears below the surface.

It would be generous to call this final act a smooth dive of any sort; it is far more chaotic, more like a stumble followed by a fall. One has the distinct impression that the last place the seagull would wish to be is under water! Only through her hunger-born determination combined with a willingness to surrender to the force of gravity, does she seem able to pull off this acrobatic feat. When she reappears, with or without a fish, she seems a bit confused, as if to say: Where am I? It’s almost seems as though, at the moment of hitting the water, for a split second, she loses all consciousness, and whether a fish is caught or not is more a matter of grace than skill.

One senses that what the seagull would greatly prefer is to scavenger dead fish on the beach or poke down at prey while floating restfully on the water. It’s good for me to see that even creatures still innocently embedded in the divine wisdom of nature have their comfort zones and cannot always stay in them if they wish to survive and thrive.